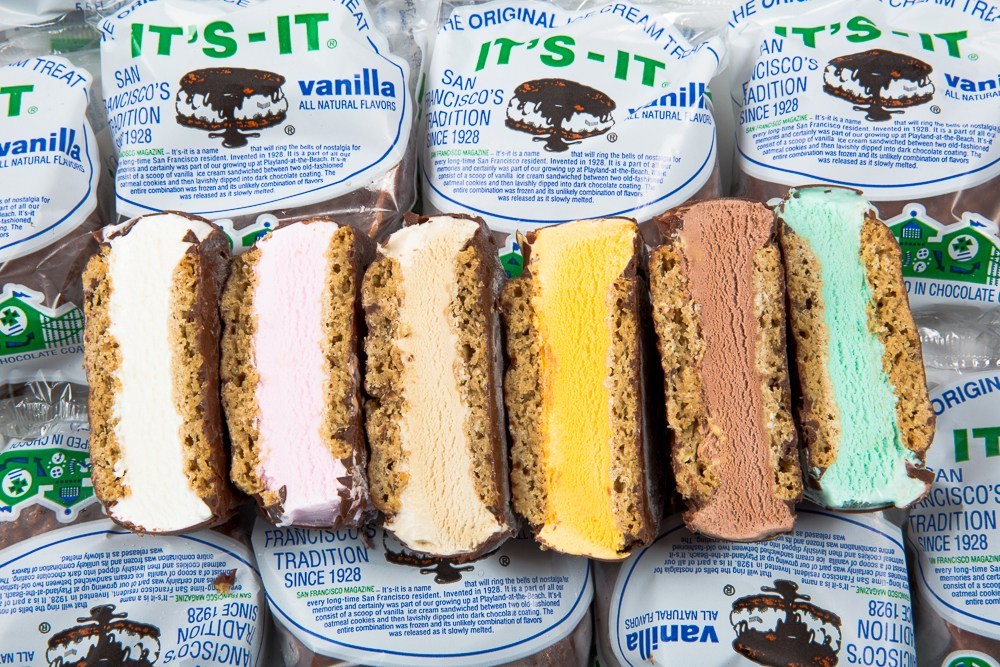 It's It Ice Cream

In 1928, a celebrated San Francisco tradition began.  George Whitney placed a scoop of creamy vanilla ice cream between two freshly baked large old-fashioned oatmeal cookies, and then dipped the sandwich into fine dark chocolate.  The delicious combination of savory sweetness was declared by all to be “IT!”  That how the IT’S-IT Ice Cream Sandwich was born and got its unforgettable name, being sold in droves exclusively in San Francisco’s own legendary Playland-at-the-Beach for over four decades.

When Playland was demolished in the early 1970s, IT’S-IT sandwiches began being individually handmade in a small shop in San Francisco’s SOMA district under new ownership.  The hunger for IT’S-IT exploded.  In order to quench San Francisco’s craving for our remarkably tasty ice cream treat, the company relocated to a larger facility in 1976.
In the 1980s, the demand for IT’S-IT grew outside of the Bay Area.  Currently, IT’S-IT Ice Cream Sandwiches are now enjoyed widely in California, Nevada, Oregon, Washington, Hawaii, Arizona, Texas and New York.  Via our website, it is now available to be shipped throughout the United States.
The growing fan base of diehard enthusiasts for this San Francisco specialty has not gone unnoticed. Most travel guidebooks to this beloved American city urge tourists to “experience” IT’S-IT. Recently, the new IT’S-IT Factory Shop located minutes from the San Francisco Airport, where all delectable flavors are always available, has become a popular destination spot for Bay Area locals and visitors.
IT’S-IT has been featured in the New York Times, the Wall Street Journal, the San Francisco Chronicle, Bon Appétit Magazine, CBS’s Eye on the Bay, the Food Network’s “Unwrapped” among many others. It was deemed “the real San Francisco Treat” on Huffpost Taste.
Several generations have savored our IT’S-IT. Throughout the years, the taste of this delectable treat remains the same as it did during its creation in 1928. Maybe that’s why the iconic IT’S-IT was named a San Francisco experience. And now a local Suisun City Treat!
Visit It's It